Hello everyone. My name is Jeff Trout and I would like to welcome you to the Technology Learning Center blog.

We are expanding our department this year. We will be offering new classes, materials and tools for the public. We will also be sharing our experiences with you here in this blog. From here, we will keep a journal of our successes and failures as we stretch our wings and fly off into new territory for our community.

Historically, the Cape May County Library has always tried to be on the cutting edge of technology. We started in 1994, when we finished automating the Library system When we reopened the renovated Mechanic Street Building, we had installed all new Compaq and IBM computers.

This was a monumental task. We added every item available for the public to a digital catalog. From here we expanded our offerings to public computers and Internet access. These computers had 8mb ram, floppy drives and 212MB hard drives. They cost $2000 to $4000 each.

Public and staff used Okidata dot matrix printers. This was state of the art back then.

In November 1994, our Library offered one of the first community dialup services. Users connected to a server and searched our catalog remotely from home. There was initially a networked CD server that contained all of our paid database subscriptions. Patrons could access these from the workstations. As each database became available in an online version, we immediately moved to that format, and implemented a Remote access application for patrons to use databases from home, for products which allowed it.

In 1996 Allen Jett created our first library website. This gave people more access to the online databases and other services. From here you could also get branch hours, phone numbers, and library events.

We offered a FRAS service, which is a full access connection over dialup, in 2001. It is still in service today, though it is used less and less considering speeds have not improved much over the years. In 2001, we also setup our first public “word processor” pcs with Internet access.

In 2002, the Cape May County Library started teaching basic computer workshops. They were originally created to introduce patrons to our new electronic resources which enhanced the Library’s on-site collections. They included the Library Catalog, many electronic databases and, of course, the Internet. They called the new department the Technology Education Center and Donna Soffe was the head of that department. Over the years she expanded on the classes. Soon we were offering help with email, Microsoft Office and digital photography to name a few. With Donna’s passion for technology and her skills at teaching, The TEC would quickly become an important addition to the library. 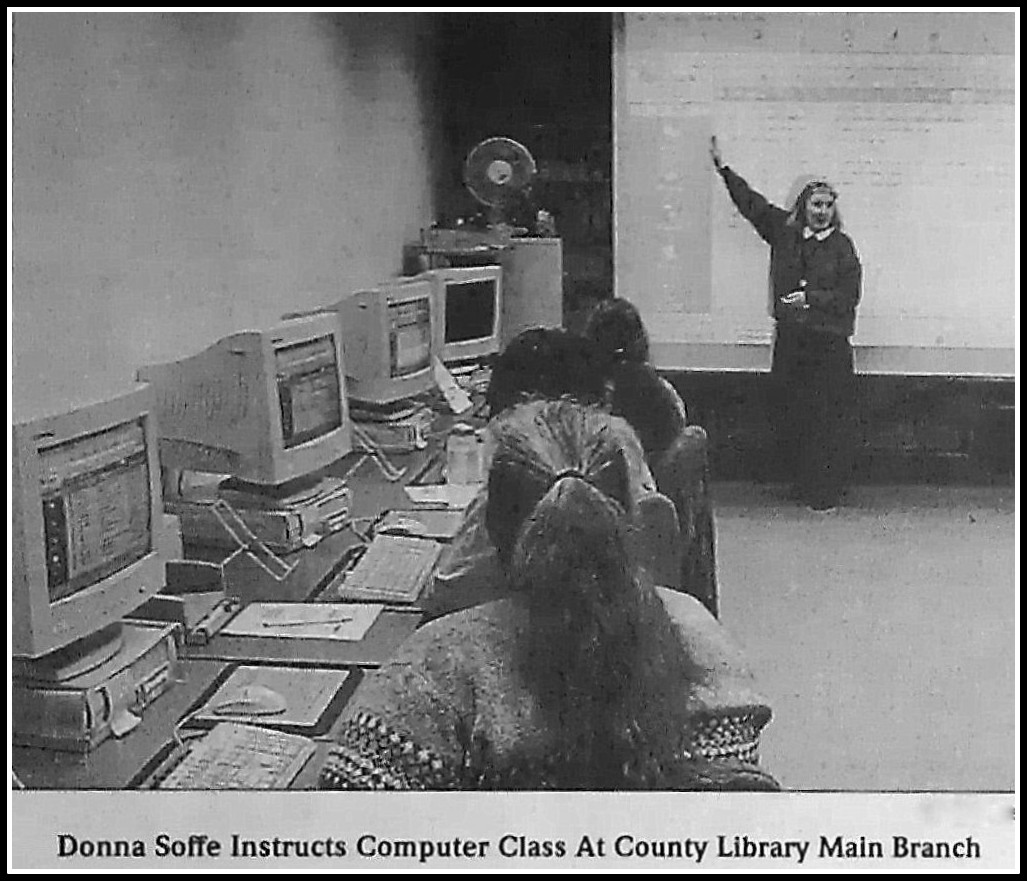 We were part of the first wave of libraries to provide public WiFi in 2005, and we provided it on a larger scale than most other libraries. Each of our eight locations still offer the service which covers a majority of Cape May County.

That spring, we installed our first cellular modem on the bookmobile. While other libraries were still using offline or manual entries for their bookmobiles, our bookmobile was online with current info. In 2010, we upgraded it to a 4g network.

We began offering downloadable Audio Books in 2006, working with the South Jersey Regional Library Cooperative. This service expanded into eBooks as well. In 2010, the organization ceased operations and nearly forty libraries including Cape May County, would have lost their collection of audio and eBooks. We took over the operation of the South Jersey Audiobook & eBook Download Center and today we manage it for the entire region.

Teen Game Night started in 2007 with an X-box and a dream. Three staff members, Jesse, Mike and Chris began the project. It was a huge success and has expanded to PS3 and Wii games as well. It is still going on weekly at the Cape May Court House Branch. They have also added a variety of board games to the mix.

Around the same time, we also joined with social media. We started on the photo sharing site Flickr in 2007. Soon after that we joined Facebook, YouTube, Twitter and recently Pinterest. We have also expanded our web presence with four webpages. There is our main Cape May County Library site, the Teen Zone, Kids Page & the TLC Page

We have designed and setup our own document and photo scanning computer as well as handicapped stations. We recently purchased a premade document scanning station that was so new to the market, that there were no instructions written for it yet and the vendors technician had to “wing it” when he did the installation. 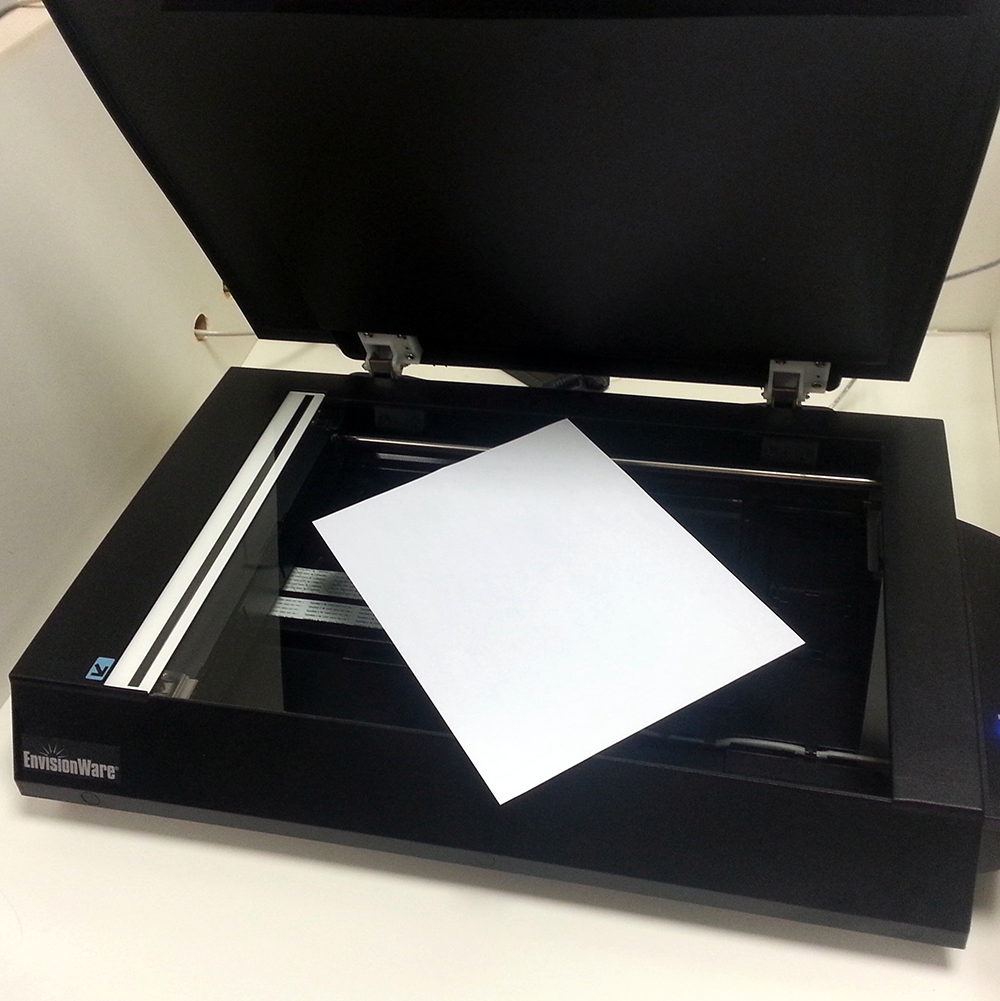 Our enthusiastic teacher, Donna Soffe, retired in 2012 and Melissa Brisbin took over as the head of the TEC Department. At that time the Director of the Library, Deborah Poillon, started the plans to expand the offerings to one on one help and new technology for the public. We changed the name to the Technology Learning Center. Melissa added a fresh outlook on new technology and services. She had already organized the South Jersey Audiobook & eBook Download Center switch, introducing our library system to Playaways and created the Cape May County Library App. She taught new classes and demonstrations on mobile apps, Prezi and expanded our department with a variety of devices for us to teach the public. Just as we were settling in for bigger and better things, Melissa was offered a new job. She is now working at the Cherry Hill Public Library and we wish her all the success in the world.
So now the Technology Learning Center is starting a new year with new leadership. 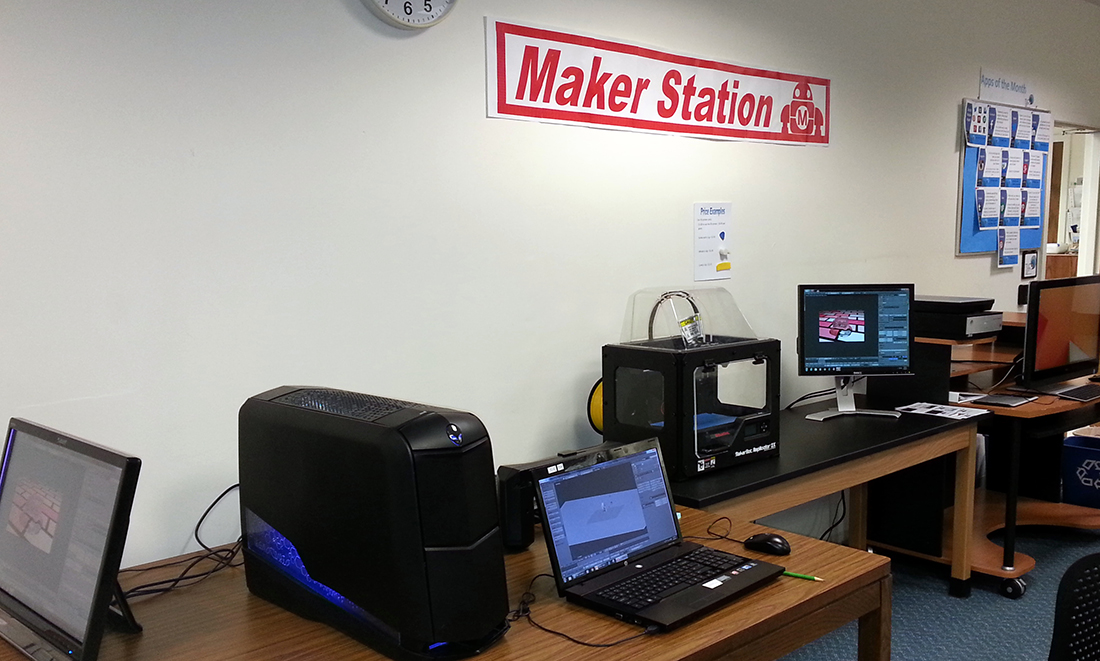 We already have a Maker Station set up for people to explore the concepts of 3D design and digital art. We still offer a variety of classes and demonstrations. We also offer one on one help for computers, tablets, phones and more. With an enthusiastic staff, we strive to help Cape May County residents become as comfortable with their technology as possible.

As we move forward into 2014, we hope you will join us here and follow the progress of our endeavor.

Jeff Trout, Head of the TLC